4 Key Differences Between DevOps and DevSecOps

Doesn’t it seem like every day there’s a new mishmash of responsibilities into a job title? One day soon, someone will be hired as a DevOpSysSecInfraArc engineer.

But today you’re focused on finding the difference between DevOps vs DevSecOps. I could somewhat trivially summarize this entire article simply by telling you to closely examine the job titles. It’s in the name. DevOps engineers work on development and operations, while DevSecOps do the same, but with a greater focus on security – Development, Security, and Operations engineering.

Of course, that’s not very helpful to anyone trying to understand the difference between DevOps vs DevSecOps roles in greater detail, so I’ll go into a little more depth explaining what the key differences are.

With two roles as similar as DevOps vs DevSecOps, I find it useful to start with an analogy. (I’ve done this before when looking at DevOps vs Cloud engineers.)

Imagine a DevOps engineer is responsible for building a well-oiled machine. A DevOps engineer is in charge of making sure each component (development, testing, deployment) works together seamlessly to produce a smooth and efficient process.

DevSecOps is like giving that engineer a gun and telling her that someone’s going to try to break in. The DevSecOps engineer not only ensures that the machine is running smoothly but is also protected from any potential threats or vulnerabilities.

In this article, I’ll break down the key differences by:

As I mentioned earlier in my analogy, a DevOps engineer is primarily responsible for building the architecture to get stuff to deployment. That includes building, maintaining, testing, and monitoring performance.

That main job breaks down into additional roles and responsibilities, but that’s the role in a nutshell.

Either way, you’re no longer just “building CI/CD pipelines” the way you would if you applied for a DevOps role. Now you’re “building and securing CI/CD pipelines.” (Those quotes are from two real job descriptions for DevOps and DevSecOps respectively!)

As a DevOps, you’re mainly focused on four areas: 🔗

You’re working on continuous integration and delivery, more commonly shortened to CI/CD. This means you’re building software systems so software engineers can regularly integrate their code changes into a shared repository (CI) and then once those code changes are integrated and don’t break anything, you make systems to automatically deploy those changes to a staging environment to be tested further (CD).

You’re also monitoring and logging. This means you’re monitoring the performance and health of systems to make sure they’re optimized.

And finally, you’re collaborating and communicating. You sit in the middle of software development, operations developers, and other stakeholder teams. You are the person that people point fingers at when things start to break because it’s your job to hold everything together and scale it up in a reliable and sustainable manner. Luckily, you’re also the person that everyone trusts to keep things running.

How do the responsibilities of a DevOps compare to a DevSecOps engineer? 🔗

You’re still building automated systems, but with more of a focus on security automation. You are using tools and processes to automate testing and scanning.

You have a totally different role in compliance. There are lots of industry-specific regulations that your employer needs to be kept abreast of. For example, if you work for a healthcare company, you’ll be operating under HIPAA regulations which regulate how data can be collected, stored, and sold.

You’re managing risk. This is also a different role. You’ll be in charge of identifying, assessing, and ideally mitigating potential security threats in the development process.

Finally, you’re back to collaboration and communication. Security is only as strong as its weakest point, so you’ll need to work closely with Development teams, Operations teams, and security teams to make sure everyone is up to date on best Sec practices, and that security is fully integrated through the software development life cycle.

That was a long old section. This one will be a little shorter. And to make it handy, I’ll summarize it all here in some charts:

What sort of background do you need to be able to handle all those important responsibilities? What degree do employers require? What skills and knowledge matter most?

Looking at that chart, you can see there are a lot of similarities. The main differences are that DevSecOps engineers are expected to have a background in security, they can have a degree in InfoSec, and they need to know more about compliance regulations and security concepts.

Let’s look at each of those backgrounds, skills, and educational requirements.

Educational requirements are very flexible in this field. Most job descriptions will say they need someone with a BA in computer science, software engineering, or infosec if you want to get into DevSecOps.

But the truth is that, for both roles, if you show up with a solid portfolio of projects, the skills I’ll get into below, and some certifications, they certainly won’t close the door on you. There simply aren’t enough skilled workers in the field for employers to need you to wave around a diploma to get hired.

This is the real non-negotiable set of requirements to get hired as either a DevOps engineer or a DevSecOps engineer. Here’s a more comprehensive breakdown of the skills required:

Then as a DevSecOps, you’ll also need:

That’s in addition to all the regular DevOps skills I listed above.

Now we’re onto the money. In previous articles, I’ve found it useful to break down not just a salary comparison but also to look at median salaries in the top five cities in comparison to cost-of-living, rent, and taxes.

Let’s take a look at the top five cities for DevOps engineers, according to Indeed’s listings.

And here’s what that looks like when you put these numbers in a nice chart: 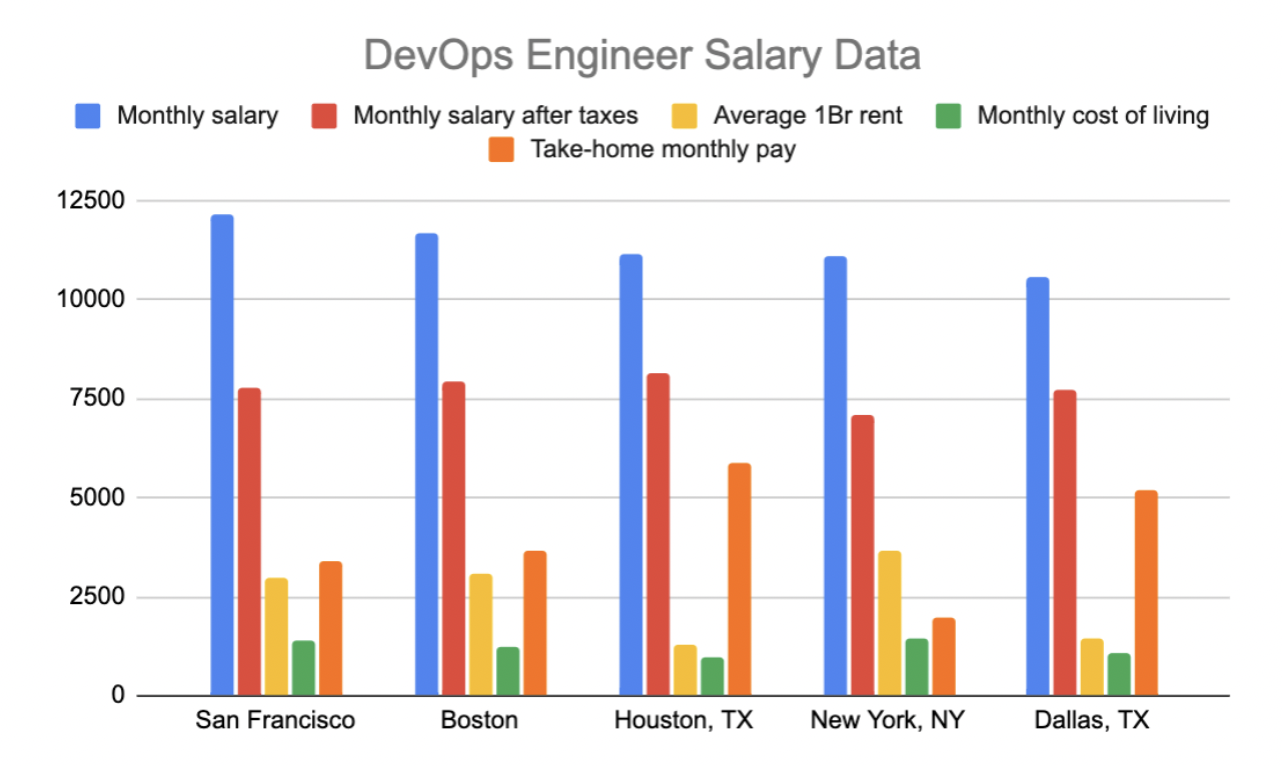 As you can see, San Francisco has the highest base salary. But if you want the highest take-home salary after taxes, cost of living, and rent, you should actually get a DevOps job in Houston, Texas.

It’s a little harder to look at DevSecOps jobs because they’re not as common as DevOps jobs, so Indeed hasn’t made a handy landing page with all the information about the top-paying cities.

However, we can look at a few job listings for DevSecOps engineers and DevOps engineers at the same company, to see how the salaries compare.

It’s more like if you’re a DevSecOps, you do all the same stuff as a DevOps engineer plus a Sec component.

In fact, I noticed very few places hiring both DevOps and DevSecOps roles at the same time. Many newer companies seemed to be forgoing DevOps engineers and going straight into hiring DevSecOps engineers instead to get a two-for-one bargain.

All the money in the world doesn’t mean anything unless there are jobs available. Right now, DevSecOps is a relatively new field that combines the responsibilities of a traditional DevOps role with a focus on security.

That’s why job prospects for DevSecOps roles may be more limited than for traditional DevOps roles. But I expect demand for this type of position to grow as organizations increasingly recognize the importance of security in the development process.

DevOps roles, on the other hand, are in high demand as organizations look to improve the speed and reliability of their software delivery processes.

In short, both roles are expected to grow in the future, but demand for DevSecOps roles may increase at a faster rate.

Let’s take a more granular look by checking out the number of job openings for both DevOps and DevSecOps engineers across three of the most popular hiring platforms: LinkedIn, Indeed, and Glassdoor.

These are accurate as I write this article.

As you can see, the numbers of job openings are actually similar on Indeed and Glassdoor. I expect that’s due to the huge amount of overlap between DevOps and DevSecOps engineers. LinkedIn is the exception, perhaps because their search parameters are different. There we can see that there are ten times more job openings for DevOps versus DevSecOps engineers.

Honestly, if you have the skill set to be a DevSecOps engineer, I’d recommend applying for any regular DevOps role and using your skillset to bargain for a higher salary. You’ll be doing the same role, plus additional responsibilities. All you need to do is convince your future employers that the “Sec” part of DevOps is non-negotiable.

And if you’re a DevOps engineer? It might be a good time to pick up some DevSecOps skills and certifications, like knowledge about regulations and governance.

Final thoughts on the differences between DevOps and DevSecOps 🔗

In summary, what is the difference between DevOps vs DevSecOps? There’s not a huge difference between them, honestly. There are a few alternate skill sets necessary. That accounts for a higher DevSecOps salary. But the two are mostly interchangeable, and you’ll notice that many employers don’t hire for both.

DevSecOps is a role that combines traditional DevOps responsibilities with a heightened focus on security. Today, it’s a relatively new field. But it’s gaining traction. While job prospects for DevSecOps roles may not be as plentiful as traditional DevOps positions, there is a growing demand for this type of role as organizations come to realize the importance of security in the development process.

DevOps, on the other hand, is an in-demand field, as organizations look to improve the speed and reliability of their software delivery. Both roles are expected to see growth in the future, with DevSecOps potentially seeing an even higher rate of growth as the need for secure development continues to increase.